Op-Ed: The most expensive race you’ve never heard of 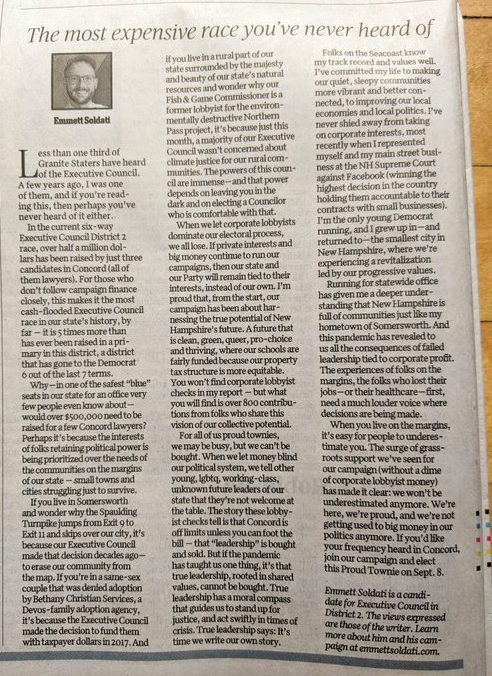 Less than one third of Granite Staters have heard of the Executive Council. A few years ago, I was one of them, and if you’re reading this, then perhaps you’ve never heard of it either.

In the current six-way Executive Council District 2 race, over half a million dollars has been raised by just three candidates in Concord (all of them lawyers). For those who don’t follow campaign finance closely, this makes it the most cash-flooded Executive Council race in our state’s history, by far — it is 5 times more than has ever been raised in a primary in this district, a district that has gone to the Democrat 6 out of the last 7 terms.

Why—in one of the safest “blue” seats in our state for an office very few people even know about—would over $500,000 need to be raised for a few Concord lawyers? Perhaps it’s because the interests of folks retaining political power is being prioritized over the needs of the communities on the margins of our state — small towns and cities struggling just to survive.

If you live in Somersworth and wonder why the Spaulding Turnpike jumps from Exit 9 to Exit 11 and skips over our city, it’s because our Executive Council made that decision decades ago—to erase our community from the map. If you’re in a same-sex couple that was denied adoption by Bethany Christian Services, a Devos-family adoption agency, it’s because the Executive Council made the decision to fund them with taxpayer dollars in 2017. And if you live in a rural part of our state surrounded by the majesty and beauty of our state’s natural resources and wonder why our Fish & Game Commissioner is a former lobbyist for the environmentally destructive Northern Pass project, it’s because just this month, a majority of our Executive Council wasn’t concerned about climate justice for our rural communities. The powers of this council are immense—and that power depends on leaving you in the dark and on electing a Councilor who is comfortable with that.

When you live on the margins, it’s easy for people to underestimate you. The surge of grassroots support we’ve seen for our campaign (without a dime of corporate lobbyist money) has made it clear: we won’t be underestimated anymore. We’re here, we’re proud, and we’re not getting used to big money in our politics anymore. If you’d like your frequency heard in Concord, join our campaign and elect this Proud Townie on Sept. 8.